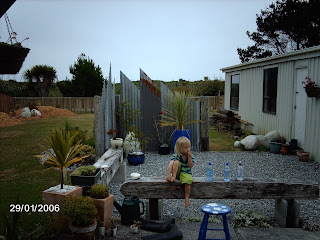 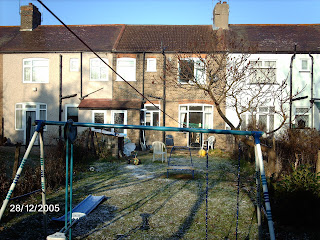 I was looking through my computer files to see whether I could find any suitable photos (most of them are on Favourite Handyman's computer) for my blog. I found the photo above, taken three days before we left the UK. It's our house in East London/Essex, with a light dusting of snow. You can't see the wilderness we cleared behind the cameraperson and it is too far away to see the garden that we created there, up by the house.
The 'wilderness' was quite something. The lady who had lived there all her married life had been widowed fairly early on and lived on her pension. The fellow who gardened for her once she was unable to do it herself came on his bike so had no way of removing rubbish. So it went down the back of the section, including the push mower and at least one abandoned washing line (which got recycled into a support for our peas). The council contractors who repaired the roof left their rubble at the back. Sometime someone decided to dismantle half (half only) of the coal shed and leave that down the back. Those bricks got recycled into a path around and through our vege garden.
Once Mrs Bell died, our landlord had a fellow in who worked for British Gas. He obviously got sick of delivering flyers and complimetary British Gas visors, because he dumped hundreds and hundreds of them down the back. The worms were red from eating the flyers once I found them! The plastic visors were a salutory lesson in how plastic does not compose. I guess the toad found his own way there - that was a cool discovery.
We had a wonderful wonderful time in that house, with friends and neighbours of all ages and I miss those people who were part of our London life often. For those of you who have made it to this blog, please know you are treasured even though I write so infrequently.
At the very top is a photo taken a month later, in the house we rented for most of 2006. No snow there. No Borough Market either. Just beach, sunshine and a whole new life for our British born son.
I'll have another go at current photos on Monday when I have multi-computer access again.
Hunter gatherer achievements today:
Hunting: zilch. Too wet, too cold, nowhere to play. A cold cold wet day.
Gathering: Bought a book on biodynamic farming from the school gala.