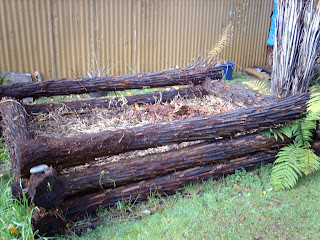 I've been a little consumed with issues of crop rotation and companion planting in recent weeks.

The way I've pored over my little maps of the section (house inconsequential box in the middle), you could be forgiven for thinking I was reenacting Treasure Island.

Our raised bed, built for me by my favourite handyman, has been our biggest garden project to date. Previously the area was covered in horrible overgrown shrubs that probably suited the space in 1968, but by last year were overbearing trees that proved easy enough to chop down but impossible to dig out without the help of a digger. Diggers cost money so digger jobs (I have them) are on hold for the moment. So we got it level (well I supervised and at the time was still banned from gardening after my post baby lopping injuries) and then covered the area in cardboard, built the walls and then added lots of compost from our compost heap. Bought compost was too expensive so we went the slow way, adding our own compost several times this winter and also growing blue lupins and mustard which I slashed and covered in more compost about a month ago.

Anyway the raised bed was going to be for carrots and onions and leeks but now I've scuppered that plan. More on that in the next post, where I will attempt to draw a map on my computer and witter on some more about veges.
Posted by Sandra at 8:01 PM