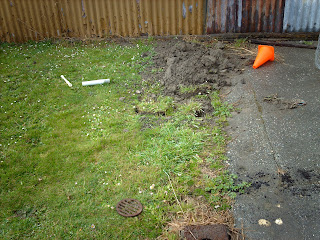 Here is a piece of lawn, dug up in places, littered with:

4. The grate which should go on top of the nearby drain

If you are not very very obsessed with gardening, then you might like to pass on my blog for the night and pour yoursefl a gin instead. Because I am about to ponder and record the fate of this ordinary patch of wet, worm infested lawn at length. 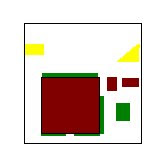 To my left is my attempt at a computer generated map of our section. The red bits are the house and two sheds. I forgot about the garage but never mind. The green bits are existing garden. Only the two bits in the front (where there is a space for the front door showing) were existing when we moved in ten months ago, but I have been expanding like the Warehouse (or Tescos, depending where you live). The green strip on the side of the house is full of garlic, rosemary and parsley. The green strip at the back of the house currently has broad beans and spring bulbs. Later it will have tomatoes and celery and basil. I'm hoping the heat of the red brick house will aid the tomatoes. The separate green box is the raised bed. It was going to have carrots, onions and leeks and I had the Autumn planting (brassicas: bok choy, kale, purple sprouting broccolli) planned for it as well.

But today I had a rethink and then another look at the last book I found on crop rotation. Planting root crops the first year of a raised bed that deliberately doesn't have access to soil below the lawn line isn't the wisest move. And the book says that for new garden, starting with potatoes is the best option. So whereas I was going to plant potatoes in old tyres in the area above the yellow triangle, now I'm planting peas and potatoes, together with some marigolds for good something or other, in the raised bed.

The yellow triangle is the area of lawn shown in the photo. Now it is going to host the carrots, onions and leeks. I have a lot of work to do. The dug up bits have bokashi underneath them. I'm doing a triangle instead of a square for a very good reason which I read in a very good book, but I've forgotten the reason right now. Favourite Handyperson has had his first warning of the job. I *idly* mentioned in the weekend that the unhealthy looking punga tree beside the raised bed is just the right size for edging my triangle garden. It was no idle mention and we both know it. Better not rain this weekend.

So, where to put the beetroot, lettuces and beans? I forgot about the tobacco in my more recent garden plans until FH mentioned it in the weekend so it is the rectangle in the left of my map. Bloody equitable marriages. I won't be digging that one though.

I have some plans around tyres in beans along the back fence. I'll have some more old tyres later this week, just a lot less money. I do love my mechanic though. He sourced a second hand part to replace the broken bits from the wheelbarrow incident for one third of the new price.

Tonight I'll be dreaming of lettuces and beetroot. Just as well I love my son so much, or else he'd be losing his sandpit.