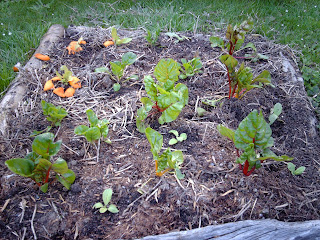 This photo is a week old. Even since then the swiss chard, borage, strawberries and lettuces have grown lots. This bed is raised about ten centimetres, possibly less, above the surrounding lawn and bordered by logs from the beach. It is in one of the better draining spots in the garden and gets lots of sun. I noticed how warm the soil was when collecting slugs from under the border logs yesterday. Significantly warmer than the soil at the other end of the garden which was getting sun but which is also contending with too much water.

This morning I went out to Camerons Community Market. I spent $24.50. For that I got:
1 beautiful clematis, a white flowered one which is already half a metre tall
1 small rose which will have lemon flowers
4 medium sized fuchsia plants
1 small fuchsia plant
2 other plants whose names I have forgotten but which are suitable for damp shady spots where vegetables do not grow
2 jars of home made jam
1 lolly cake

I was pleased. The yellow rose is going out the front in my yellow garden project. I want it clambering over the falling down fence which borders our driveway and up the large old tree.

I also collected two bales of peastraw and paid $10.50 per bale. 'Tis like gold, pea scraps. I had vowed I would find alternatives in order to be less dependent on a product which has to be trucked over from Canterbury, but I haven't yet weaned myself off in the slightest.
Posted by Sandra at 1:57 PM

hmmm I had heard prices were huge in the North Island. I gather it all comes from Canterbury. The shop person told me it took a long time to get hold of the contact for the truck's worth which arrived this morning. They need to stop turning Canterbury arable and pasture land into dairy farms and 'lifestyle blocks' of mansion houses and enormous mown lawns.